Beyond PPP & Other Metrics of Law Firm Success Infographic

No one financial metric can show the complete picture of a law firm or its competitive strategy. See how we combine PPP along with other metrics including retention/attrition to determine law firm health. Download our infographic. 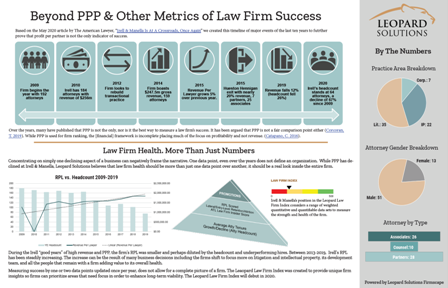 Concentrating on simply one declining aspect of a business can negatively frame the narrative. One data point, even over the years does not define an organization. While PPP has declined at Irell & Manella, Leopard Solutions believes that law firm health should be more than just one data point over another, it should be a real look inside the entire firm.

Over the years, many have published that PPP is not the only, nor is it the best way to measure a law firm’s success. It has been argued that PPP is not a fair comparison point either (Corcoran, T. 2019). While PPP is used for firm ranking, the [financial] framework is incomplete placing much of the focus on profitability and not revenue. (Catapano, C. 2016).

To create our infographic, we used data from Firmscape and Leopard List