Laura Leopard was featured in a Reuters article highlighting Leopard Solutions data presented in a recent webinar hosted by Leopard on the long road women face when it comes to making partner at law firms. 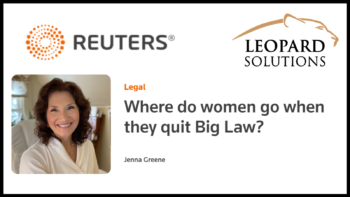 In the article by Jenna Greene, Laura discusses data shared during the webinar noting what 1,360 women lawyers who quit the top 200 firms in the last 12 months did next.

As the article notes, 655 of the women, or 48%, left their firms to work as corporate counsel.

Laura said, “A lot of the reason that compels them to go (in-house) is quality of life. They can work normal hours, they can go home and see their kids.

But for women, lateral moves were a distant second choice compared to in-house, with 420 women, or 31%, opting to change law firms in the last 12 months.

As Jenna said in the article, “That discrepancy alone helps explain why we see fewer women making partners. Not as many of them are staying at law firms.” Laura noted, “Fewer homegrown folks are getting promoted to partner.”

In 2020, for example, Leopard’s data found 1,325 Big Law laterals made partner — 811 men and 514 women. But among those who started their careers at a firm and stayed put, there were just over 800 partner promotions in total, though men and women were elevated in almost equal numbers.

“You would lateral somewhere else if you really wanted to make partner,” Laura said. “You might feel your odds are better of making partner by going in somewhere else.” As Reuters reported, the Leopard data shows women are considerably less likely to lateral.

For both men and women, the government was the third most popular destination with 174 women and 194 men taking legal jobs at the federal, state or local level, whether as prosecutors or with an agency.

Men were considerably more likely to become a solo practitioner, with 69 men but only 19 women leaving Big Law last year to open their own firms.

Whether lateral or homegrown, man or woman, the article notes that the data showed that the time it takes to make partner has been increasing since 2012 — though non-diverse men generally have the shortest path.

For women, the stretched-out time frame — an average of 3,180 days, or more than eight years, for a non-diverse woman in 2020 — creates another problem.

If women are “postponing having a baby, they’re postponing getting married, and now it takes that much longer to make partner? I guess the question is, ‘Is it even worth it?’” Laura said. As the article noted, “for many women, the apparent answer continues to be no.”

Watch a recording of the webinar.